GET ACQUAINTED WITH THE VINEYARDS

Juanicó is characterized by its calcareous clay soils, its undulating terrain with good water drainage, seasons underscored by cold winters and hot summers with refreshing winds and high luminosity; all excellent conditions for high quality wines with great aging potential.

THE RANGE OF THE GREAT WINES OF THE SOUTH

In total, Establecimiento Juanicó manages 307 hectares of its own vineyards and just over 150 hectares of associate producers’ vineyards. They work in close collaboration throughout the year, carrying out similar tasks under the technical direction of the Establishment’s agronomic team. This implies an unprecedented distribution of technology in Uruguay and has therefore become a model.

Due to the oceanic influence and afternoon winds on the River Plate Estuary, there is a significant thermal gradient between warm days and cool nights during the ripening period of the grapes.

Different varieties are cultivated on the Establishment and all clones and rootstocks with the greatest quality potential are chosen. All plots go through rigorous clonal selection, which allows a high homogeneity of the fruit produced.

CHARACTERISTICS OF THE TERROIR

The first vineyards were planted in the Southern part of Uruguay, the Juanicó region, in soils with high clay content, medium depth and good water retention capacity due to silt-textured sedimentary rock from the Quaternary era.

A few years later, the area was extended to Progreso, on soils with similar textural characteristics but much richer in calcium carbonate. Vertisol, as this type of soil is called, has very expansive clay, which expands during hydration and contracts during dehydration, creating deep cracks which bring oxygen and life to the entire profile. Research and development led us to explore new terroirs, planting vineyards in many new wine-growing areas. All regions have a marked coastal influence (oceanic and the expansive River Plate Estuary) with an average temperature range of 10 to 15 degrees and average minimum temperatures in the maturation period of about 15 degrees, with a similar rainfall. 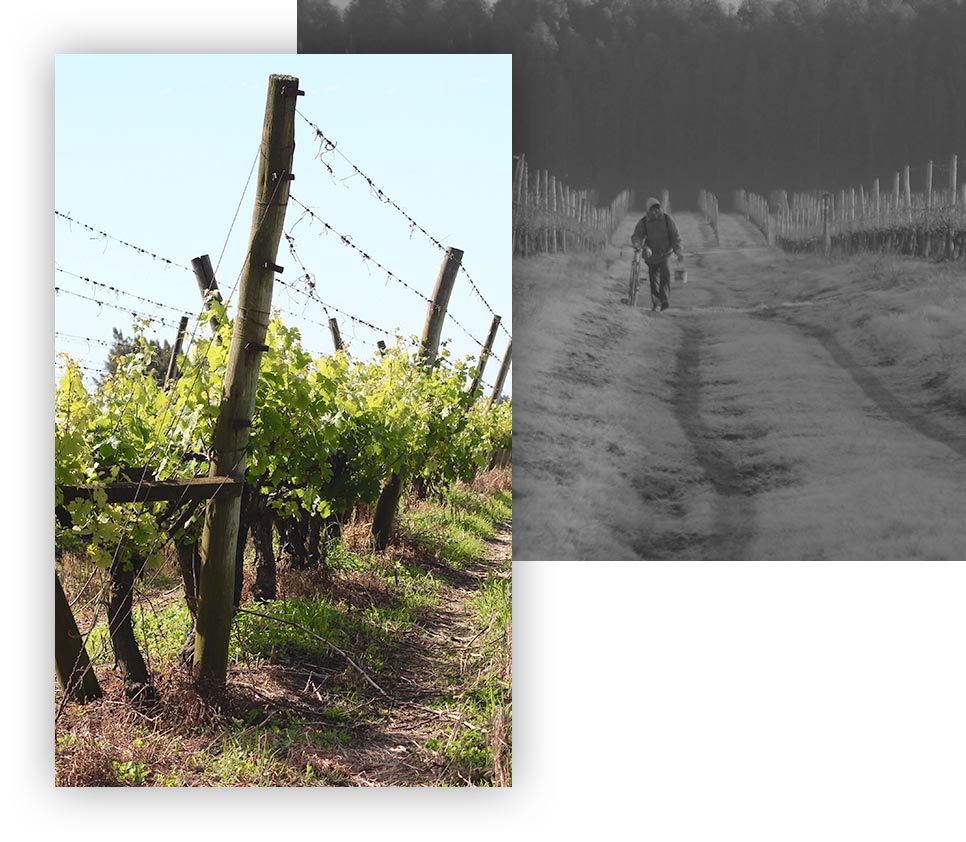 “We operate our vineyard on a sustainable production model, applying principles of organic agriculture with a strong emphasis on concern for the environment, the safety of our people and our products. The goal is to achieve a balanced viticultural ecosystem with minimal intervention and attention to detail around the impact of each of our actions”

Establecimiento Juanicó currently has 307 hectares of its own vineyards. Each year, in response to global demand, the cultivated area has increased, incorporating new varieties or replacing vineyards through techniques such as regrafting or a change in varietal.

The vineyards employ either the cordon training method with a single vertical plane of vegetation, or Lyre, where the canopy is divided into two inclined planes. In both cases, the architecture of the foliage seeks to maximize light capturing efficiency, improving photosynthetic efficiency and optimizing the fruit’s microclimatic conditions.

Pruning is done manually during the winter, using a long or “Guyot” pruning system on some plots, and short or “Cordon de Royat” pruning in others. The number and distribution of buds or growth points is determined from the analysis of vegetative and productive parameters of previous years, and therefore, each plot’s history helps us ensure balance the following year.

To achieve adequate vegetative and productive balance, grassy areas are planted within the vineyard to selectively compete with the vines for water and nutrients, regulating vigor and generating moderate water stress during the summer to maximize the quality of the grapes. Simultaneously, these grassy areas provide biodiversity, creating an environment conducive to population growth of beneficial insects which ensures a natural balance of the ecosystem.

THINNING OF BUNCHES AND LEAF PULLING

The amount of grapes per hectare is adjusted whenever necessary by thinning prior to veraison (the beginning of ripening), this reduction in the quantity of fruit allows aroma, color and flavor concentration, as well as improvement of tannin quality, allowing for complete maturation of the skins and seeds. Accompanying the yield adjustment, the microclimatic conditions for ripening are also optimized beginning very early in the spring by removing leaves from where the clusters are located, promoting gradual sun exposure and adequate aeration of the fruit.

Ripening is closely monitored by controlling various analytical parameters of the grape such as the concentration of sugars, acidity, pH, anthocyanins and polyphenols. The harvest is set once the level of ripening of the tannins and the aromatic profile are acceptable. This is done through taste tests at the vineyard carried out by the winemakers themselves who check that the seeds are brown and the skin presents ripe tannins (neither green nor astringent), while also assessing whether the aromatic window is suitable for the wine that is being produced.

The entire harvest is done manually, taking advantage of the cool early morning hours and ensuring the health of the grapes in the process. During the harvest, the fruit is classified at each plant, separating the clusters and grapes that are not deemed of highest quality. In some cases, a second separation on a classification table concludes this task prior to destemming at the winery.

Transport to the winery is carried out in the harvest crates filled with approximately 16 kg, or in 350 kg capacity bins, which are washed immediately after unloading. Throughout the transport process, the integrity of the grapes and overall hygiene are conscientiously handled, meanwhile also minimizing the time between harvest and processing.